Very happy with this necklace - which is just about finished.  I just need to figure out an adjustable slider so the necklace can be worn at several lengths. 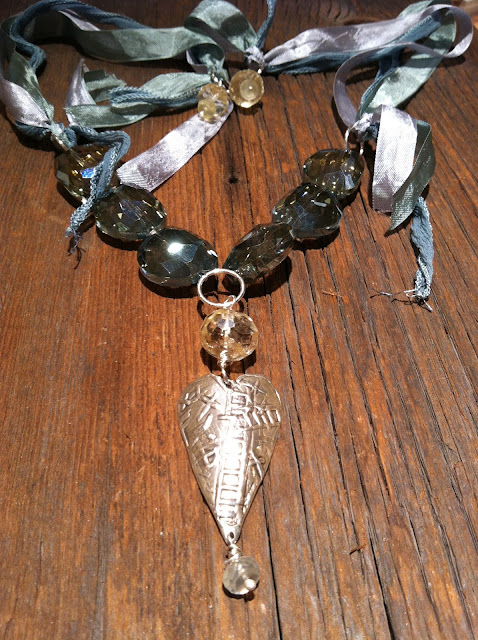 This next piece can be worn as either a bracelet which wraps several times or as a necklace. 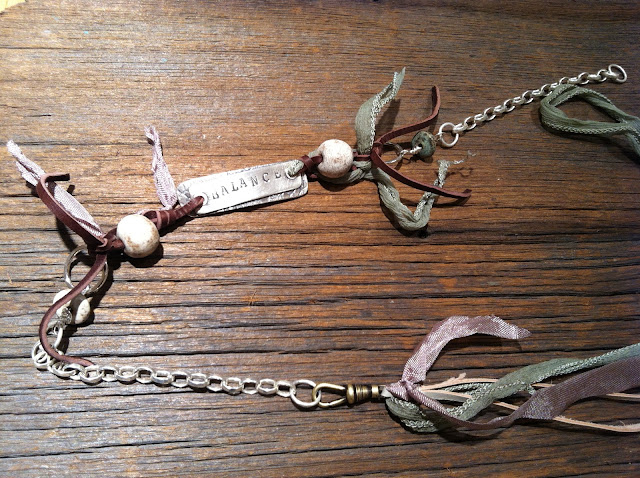 I have so much on my workbench to complete for Friday.  I hope that the creative juices keep flowing and that they flow quickly and that I manage to stay on task. Grasshopper mind and all that!
Posted by Nicola Natland at 10:37 PM 1 comment:

Just a hint of what is on my work bench at the moment.  Earrings waiting to be completed and a necklace which is nearly finished. Have lots of things that need to be finished off - I have completion anxiety! Too funny - I crack myself up!

Posted by Nicola Natland at 8:29 PM No comments:

OK - this post is not for the faint of heart or if you are squeamish.  But, I thought that I would post this so I could possibly prevent this happening to someone else.  Last Sunday after breakfast and whilst still in my jim jams I decided that it would be a great idea to saw some tiny rivets before getting myself ready to go to the Anthropologie Holiday Workshop.  I had been on the wait list and they called the night before to say they had a space - so I was excited!  The plan was to quickly saw 6 rivets - that was the plan!  As I did not have a huge amount of time, I held the handy dandy tube cutting jig in my hand - 6 tiny rivets, no problem - was my thought.  What happened was my saw blade snapped and embedded itself into my finger.  Initially, I could not work out whether I had completely sawn down into my finger and it took me a few deep breathing moments to work out what had happened.  I was still attached to my saw frame at this point!  After my hubby released me I decided that it would be a "good" idea for him to hold onto the end and pull it out - he did ask me if I wanted something to bite down on!  After two unsuccessful tries - ouch - I realised that we would be off to Urgent Care to get it removed. By the way, it's really hard to undress and dress with a saw blade sticking out of the end of your finger. Just saying! 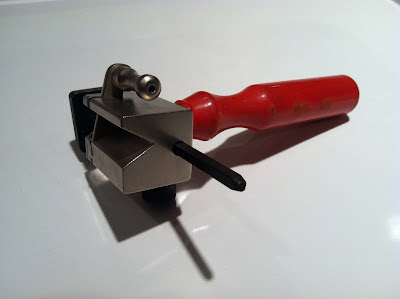 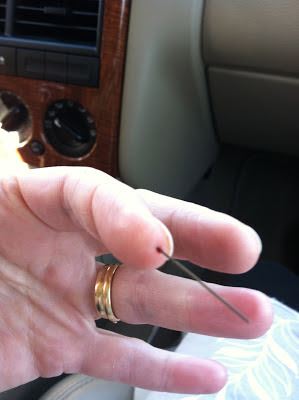 You cannot really tell from the photo but it is down to my knuckle!  So, 3 x-rays, 1 tetanus shot and 3 injections in my finger to numb it later and a discussion whether it would be best to pull or push - went with the pull even though the blade would saw through my finger as it was pulled out as the Doctor was worried about the blade snapping in my finger - it was out! Yeah. so one more x-ray to check there was nothing left behind and I was on my way home! 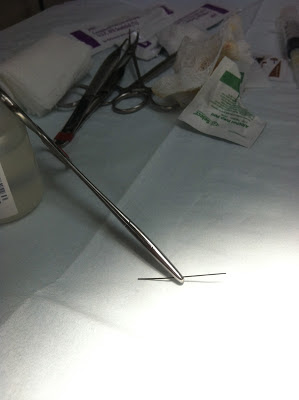 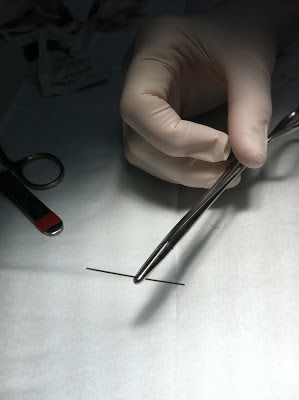 So back to the rest of my day - I called Anthropolgie and they very kindly moved me to a later class and I dashed over there only to realise that I couldn't take part as my finger was still totally numb and I was probably not safe to use the glue gun!  Actually I am not safe to use a glue gun at the best of times!  I think that the humble glue gun could be quiet easily be used as an instrument of torture.

So after 1 week on yucky antibiotics and a pain in my arm from the tetanus I have learnt my lesson.  Always clamp!  Always, always, always - no exceptions! You have been warned! 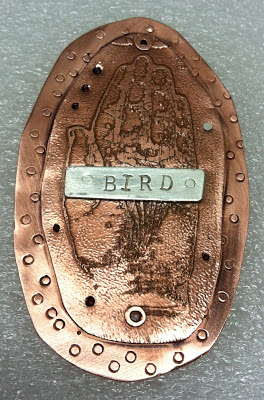 This was the piece that I was working on - hmmm...! 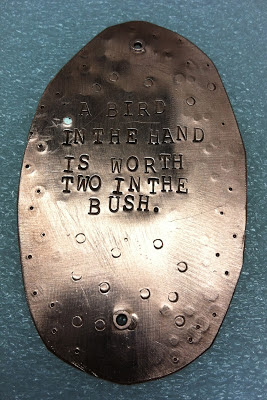 Posted by Nicola Natland at 7:31 PM No comments:

My birthday falls on Halloween - which, when I lived in England was not a problem. But, Halloween is so huge in the United States that I think that like people born on Christmas Day (other than Jesus!) I must start to have a half birthday. Or be more like my brother who always has a birthday week! 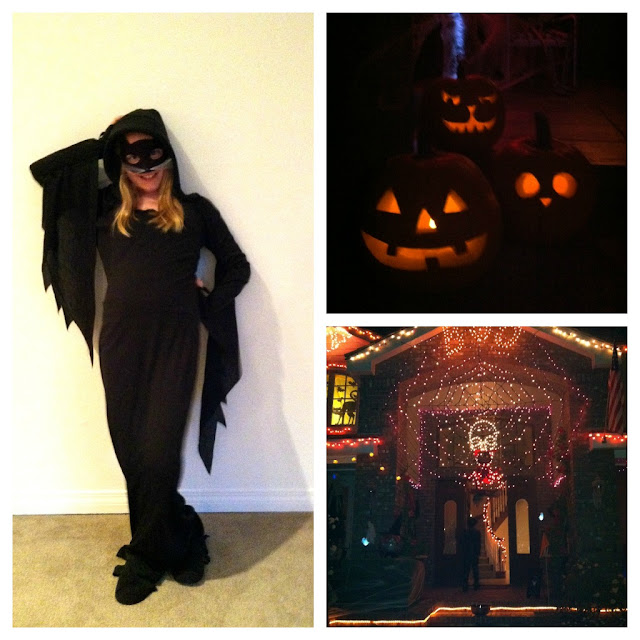 O.K. enough of my moaning - as a family we actually had a fantastic Halloween.  The community where we live is one of the best places for kids to trick or treat safely and my daughter a.k.a. Cat Vampire Girl had a blast.  On the Sunday before Halloween we had a Pumpkin Patch at school, on Monday I did a craft party with my daughter and five of her friends, on Halloween during the day we had a party at school, we carved pumpkins in the afternoon and then we trick or treated until 9:00pm. 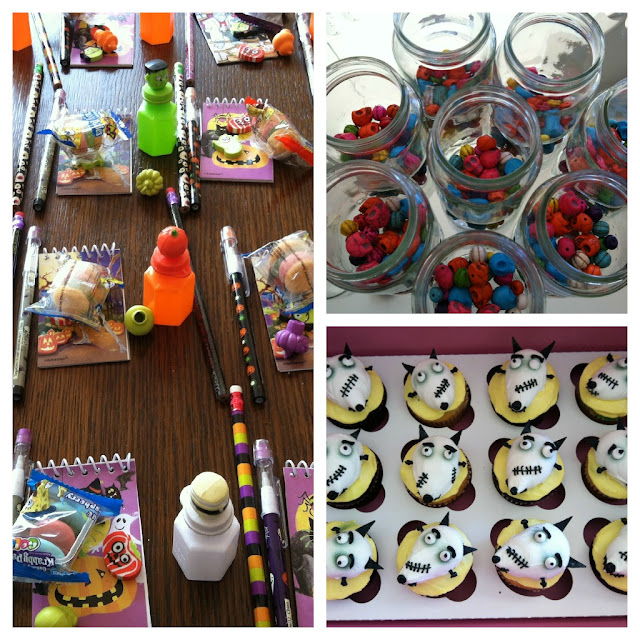 Don't you just love these cupcakes - Frankenweenies! As you can probably tell despite my Grinchiness that I really do throw myself into the Halloween spirit. So until next year - "I am Dracula, blah, blah, blah!"


Posted by Nicola Natland at 4:42 PM No comments: